Another Chantilly Lace Sundress down!  I whipped up a 6-12 month size for my cousin’s 10 month old daughter, Amenze.

I don’t have anything too exciting (besides pictures) to report.  I followed the pattern exactly except for using a bigger (H) hook.  I like that this size isn’t very long.  It’s great for babies who are crawling or have just started walking.

I used Knit Picks CotLin in “Conch” – less than two balls!  I think the color really compliments Amenze’s complexion.  Also, the yarn came from stash.  Hooray for me!

I have one more little dress to make, for Kirsi, in dark pink, but I’ve taken a break to knit a sweater for Ronan.  I felt like his knitting needs were being ignored. 😛  There are just so many cute girly patterns that I can’t stop making stuff for my little ladies!

My friend, Sara, is due to welcome a little girl into the world this October. I offered to make her baby a head covering (haha) of her choosing, and she picked the Wintergreen Bonnet. I took it upon myself to give her future child the nickname Lemmie.  Brazen, I know.  I think it’s adorable.  It’s her initials cute-ified. 😛

I think the most appropriate color for a baby named Lemmie is a lemony yellow. As such, I picked up a hank of Plymouth Yarn Worsted Merino Superwash in the “Butter” colorway for the body and used Malabrigo Rios in “Plomo for the edging and icord. 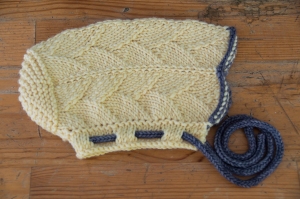 I had to go up to size 7 needles to get somewhat close to gauge.  The size 5 needles called for in the pattern resulted in a bonnet fit for a hamster.  I think the proportions are a little bit off, too.  It looks too long and too short.  The back is also kind of strange, but it might fit better on a smaller baby.  I tried it on Ronan, but he’s 8 months old and has a pretty big head.  Hopefully it’ll fit a newborn perfectly!

Maybe Sara will take some action shots once Lemmie’s here. It’ll look much cuter on a baby than on my old table!

On a whim, my sister-in-law and I decided that Ronan needed to be dressed up in a little football outfit and photographed in those delightful newborn poses you see from professional photographers.  I did a little research on Ravelry and found two patterns to modify.  Both pieces were made with Malabrigo Rios in “Coco” and “Natural.”  First, the hat:

I made a ton of modifications to this pattern.  All of them can be found here.  I (poorly) embroidered some laces on the hat to make it look more authentic.  I think it turned out pretty cute!

The soaker got some laces, too: 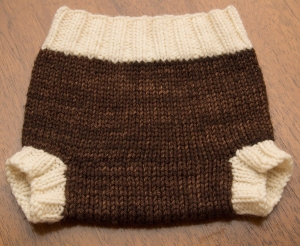 Back of Ronan’s football soaker.

The details on the soaker can be found here.

The photo shoot went incredibly well, considering I was behind the camera.  It would have been easier to pull off had I had full use of my knee, but I did what I could.  My sister-in-law did a fantastic job posing him, holding up backgrounds, and slipping him his pacifier when needed.  Ronan did not behave.  He was crying, grimacing, and/or covering his face for most of the shoot.  Don’t let these shots fool you! 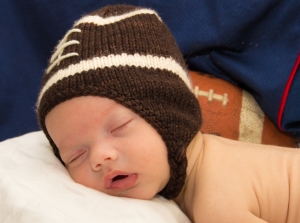 This is by far my favorite. 🙂

Look at that serene baby!

I’m looking forward to doing a shoot with the girls once the weather cooperates.  It’s been rainy for the past two days, and we’re expecting more tomorrow.  Maybe I can get some shots of them in their Christmas outfits!

Kirsi’s Miss Daisy is blocked, buttoned, and ready for action!  Everything is the same as Eva’s aside from the size.  This one is the two year old size.  I hope to get pictures of all of the kids modeling their Christmas outfits as soon as I pick up a pair of pants for Ronan and some blouses for the girls.

Extra details can be found here.

My software download card for Lightroom 5 arrived yesterday. (Squeeee!) I had been watching tons of tutorials and reading lots of articles while I waited for it to arrive, so I was confident I would be an expert once I had it installed. Silly me. I quickly discovered that I had no idea what I was doing, and, much to my dismay, made my poor sister-in-law look like a glowing alien.

I returned to YouTube, watched a few more tutorials, and picked a new victim. This time it was Kirsi. She fared much better than Maija. 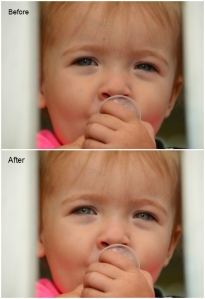 Now it’s not perfect, but I think it’s an improvement. I even edited a beach scene.

I am pretty stoked, I must admit. I’m loving this new program. Previously I used GIMP, which probably does the same stuff as Lightroom, but I never bothered to learn much about it.  I doubt I’ll be going back, though, since I’ve now been spoiled.

The next step I’ll be taking is changing my camera’s setting to shoot in RAW instead of JPEG. I’m really nervous to do it, but from what I hear, it makes for better images. I’d like to get some more shots of the kids. Maybe something I can use for this year’s Christmas cards. Getting a three year old, an eighteen month old, and a newborn to pose together shouldn’t be too difficult, right?

Before Ronan was born, Sara knit him an adorable hat.  I snapped some shots of him wearing it today.  It fits with a little room to grow, so it’ll be perfect for this fall/winter!

The pattern is I Heart Cables for those of you who might be interested in making one yourself.

Sara used Malabrigo Rios (she knows me so well!) in “Paris Night.”  Ronan must like Rios, too, because he didn’t mind wearing the hat.  In fact, he fell asleep wearing it, as is evidenced in the above photos.

I’ve been trying really hard to improve my photography skills.  Through a stroke of luck, I was able purchase a few more photography tools, and I’m anxiously awaiting their arrival so I can play with them.  The most important is Lightroom 5, which I’m DYING to use.  If anyone wants to pass along some tips and tricks or recommend some sites or books, I’m listening!  😀

Three out of five Christmas outfit pieces are complete! 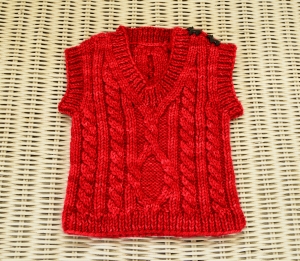 This adorable little vest was knit with size 4 and 5 needles and in Malabrigo Rios in “Ravelry Red.”  I followed the instructions for the 6 month size (the smallest size available), but I used smaller needles so the vest would turn out a smaller size.  Ronan will be less than 3 months old come Christmas time, and he’s not exactly a large baby. The chest measures 13 inches unstretched.  The design is very giving, so it should last him through the winter.  This was an incredibly quick project, and although I hate seaming, I didn’t mind the two small seams on this garment.  I got to brush up on my seaming skills, which isn’t a bad thing.  (I sure needed it!)

I chose to use two Scottie dog buttons to close the shoulder.  I’ve had them in my button stash for many, many years.  I’m so glad I was finally able to use them!

I did it!  Eva and Kirsi have matching winter hats! Well, except for the color, that is. 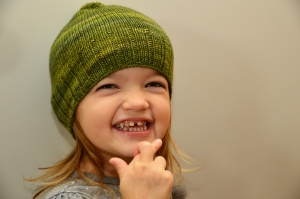 I used the same pattern and made Kirsi’s a tad smaller than Eva’s. Kirsi refused to model it for me, so Eva stepped in.  I can always count on her to get in front of the camera.

I hope Kirsi warms up to it over the next month.  If she doesn’t, Eva will end up with two winter hats, which I sure she won’t mind. 🙂 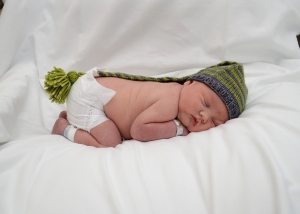 Due to some complications (suspected cholestasis), I was induced three weeks early.  Thankfully, I was able to have my second VBAC and didn’t have to recover from major surgery while caring for three kids under three.

Knitting has been next to nonexistent over the past couple of weeks, so this post will have to tide you over until I can get back to being productive!

The first of five Christmas outfit pieces is complete! I love it.  It’s absolutely beautiful.

I used about 1.2 hanks of Malabrigo Sock in “Boticelli” and size 6 needles.  My gauge came in at 6.5 stitches x 8.5 rows = 1 inch.  Still smaller than what the pattern called for, and I used needles two sizes bigger! I chose two white flower buttons for the back of the dress.  I didn’t want to go with anything Christmas-y because I’d like her to be able to wear this dress for more than one occasion.

Instead of moving straight to Eva’s Christmas dress, I’ve decided to make Eva a winter hat out of the leftovers from Kirsi’s dress. My cake is wound kind of tight, and I didn’t want to put the yarn into storage like that.  Keep your eyes peeled for the next Boticelli project!  🙂

Find me on Ravelry!